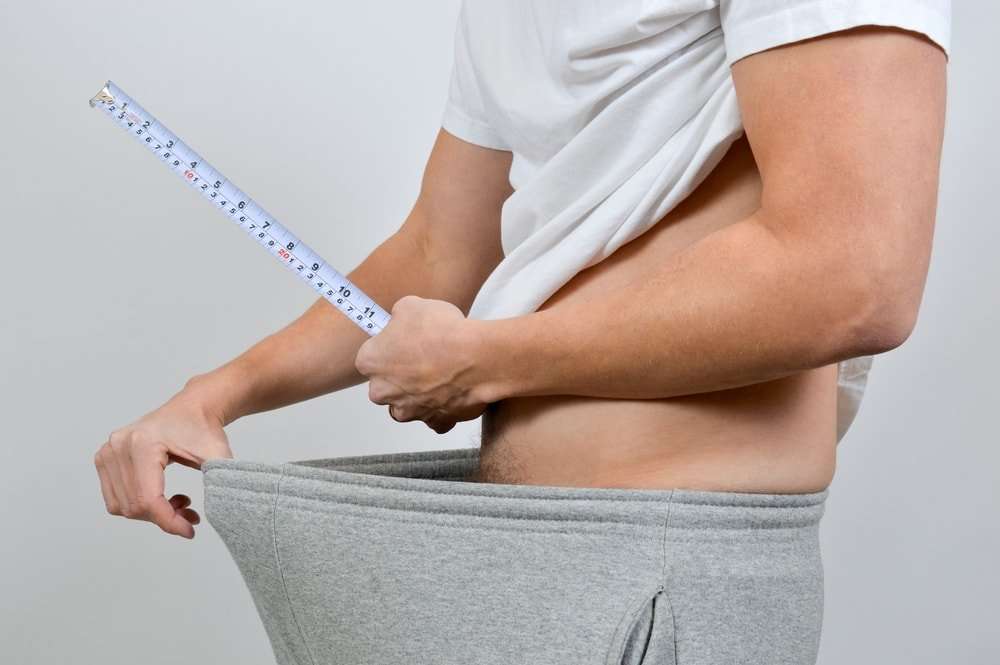 I think every man I’ve ever worked with has wondered, “Am I smaller than average down there?”

Up to 45 percent of men believe they have a small schlong. So if you’re looking down in your pants wondering if you’re measuring up, you’re not alone.

Even if you’re looking down there saying, “Damn I’m huge, this is great,” Not so fast, big boy! You might actually be average. You may even be smaller than average.

In short, the perception you have of your own dick is probably wrong, and I’m here to make it right.

Why Do So Many Men Worry About Their Penis Being Small?

Let’s be real: there’s a lot of pressure on penises to be big, to be hard, to perform. On top of that, men don’t often see other men’s penises. Especially not erect. We all know that saying, “he’s a grower, not a shower”, which means that a man’s flaccid penis may become surprisingly large when it is erect.

And then there are plenty of men who have a big penis when it is flaccid, but it doesn’t grow at all when it becomes erect.

The truth is, penises are like fingerprints. Every penis is unique.

What Size is the Average Penis?

The truth is, most men have average-sized penises. (It’s the law of averages, man!) So how small is smaller than average?

The average-sized penis is between 4 ½ and 6 inches. This is a global average. If you’ve seen other statistics online, remember that those might be from a small population size. Maybe the researchers only asked 18-year-old white men living in Indiana, which is often the case with certain research studies.

Other statistics claim to report penis size by country. Remember that a lot of these surveys are self-reported. The distinction between 30 men who happened to be online at any given moment who self-report their penis size… of course they’re going to add some millimeters or even inches to their penis size. No one is checking to ensure they’re not just making it up!

White guys in a 1960s Indiana college town does not represent everyone with dicks in the world.

Reliable and trustworthy researchers control how each penis is measured to make sure that they’re measuring all of them the exact same way (which, by the way, is from the base, along the bottom size of the penis, to the tip.) Then they calculate what the average is.

What Women Want from Their Partner’s Penis

Men are often worried that women won’t like the size of their dicks. Here are some things to keep in mind.

This myth continues to prevail, but women do not always want big honkin’ giant-sized penises.

One amazing study shows that women prefer average-sized penises. When researchers asked women what size joystick they would prefer their partners to have, they only selected a larger-than-average penis for a one night stand. For everything else, including for their boyfriends and long-term partners, the woman chose average-sized penises.

Width, or the way a penis is measured around itself, is actually way more of an indication of how much pleasure she’s going to get from that penis. Girth matters more than length.

Why does girth matter more? Consider how a vagina is laid out. At the first 1- to 2-inches inside the entrance of the vagina are the vast majority of nerve endings that exist inside a woman’s body.

Big pleasure takes only about two or three inches! That’s where you find the majority of the nerve endings inside the vagina!

A really long penis is more likely to hit the cervix, which is the end of the cul-de-sac. Back here, the vagina no longer gives a whole lot of pleasure, and in fact, things can start to get painful back here at the end of the street.

Having a long cock isn’t always better – it might end up causing your partner pain.

In fact, she might be less likely to reach orgasm from a longer dick than she is going to from a shorter dick that happens to be girthier than average.

All this information is good for any man to have, and I hope you found something empowering or interesting or educational in this tidbit. But what can you actually do with this information?

How to Maximize Her Pleasure With Your Penis: A Personal Story

Listen up: the size of your penis matters way way way less than you think it does when it comes to being an incredible lover.

A man that I used to date had a smaller-than-average penis. It was smaller than average in both length and girth.

It didn’t matter. We had the best sex of my life.

It wasn’t even about the “motion of the ocean” – there’s no magic way to move or thrust to make small penises more pleasurable. It has nothing to do with that. Instead, this man made love to me with every cell of his body. He came up with these crazy awesome ideas of what to do in bed that were mind-blowing.

For example, we used to have sex to music. We would TYPICALLY pick songs that you’d associate with sex, but this one time he put on Michael Jackson’s Thriller. While Thriller may be one of the greatest albums of all time, it is not baby-making music by any measure.

It didn’t matter! The way he had sex with me changed with every song that was on the album. It was like being at an amusement park or a Baskin Robbins where we got to sample ALL THE FLAVORS! It was super fun, and VERY pleasurable.

Creativity, spunk, enthusiasm: These things matter more than what’s in your pants. My ex was so creative in the sack that the size of his penis never even occurred to me as a potential barrier to pleasure.

He used to push things off the table and lay me down on it and make out with me and touch me and pleasure my whole body. He was with his hands and great with his mouth. He knew how to give me pleasure, make me orgasm, and take care of my sexual needs.

His penis size was the last thing on my mind.

At the same time, I’ve had sex with men who had big penises and didn’t even try.

Can you see the difference?

I would rather have sex with a man who has a small penis who gave a shit about my pleasure, instead of a well-endowed man who felt like his big dick was God’s gift to women. That’s the honest truth.

I’m an experienced sex and relationship coach who believes that a better sex life leads to a better life. If you’re struggling with something, whether it be premature ejaculation, erectile dysfunction, or if you’re just looking for ways to spice up your sex life, drop me a line. I can help you create the sex life you’ve always fantasized about.

If you’re looking for a way to boost confidence, Come When You Want is my step-by-step guide to lasting longer in bed, experiencing ejaculatory control, and improving your relationship to your body AND your partner. It delivers many of the same tools I use in one on one coaching but in a video format you can access from your phone or computer. Check it out!