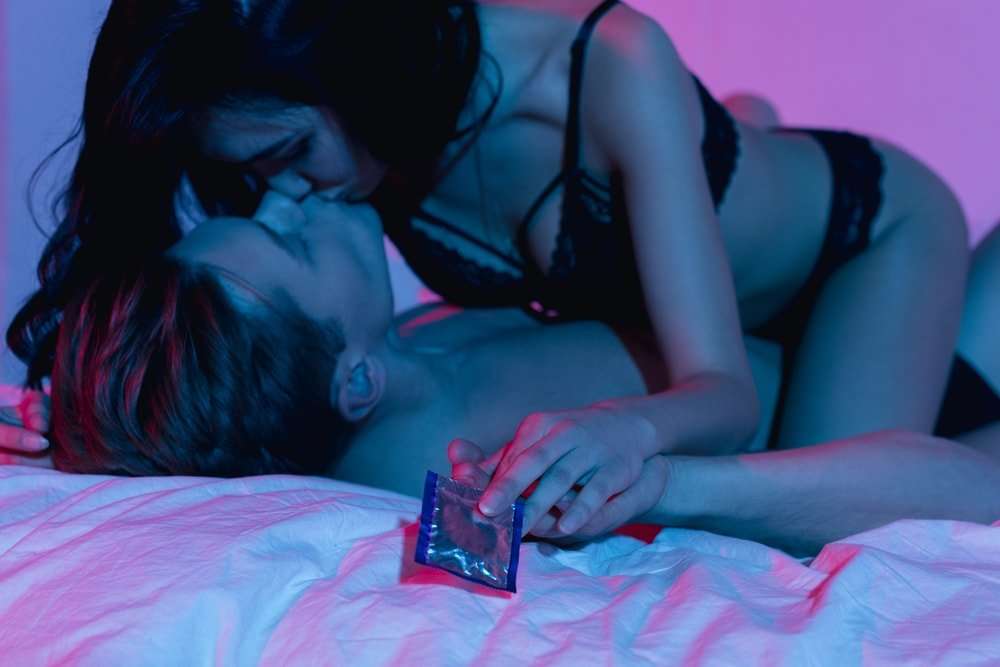 That’s why I’m going to teach you how to come with a condom on.

At the end of this blog post I’m also going to give you an idea that COULD BE DANGEROUS for your health, and if you don’t understand exactly how to do it, you’re going to hurt yourself. So be sure to read until the end, because if there’s something we want to avoid, it’s risking our health for sex. Mmmk? Got it?

Why Would You Want to Finish Inside A Woman (With a Condom) Anyways?

It’s the most romantic end to sex. As I mentioned before, if you interrupt yourself right before you reach orgasm, you have to disrupt the moment, break eye contact, take the condom off, and completely ruin the romantic end of two people feeling really connected and doin’ the deed.

Secondly, simultaneous orgasms are basically impossible to achieve if you’re pulling out. And for a lot of people, condoms are a non-negotiable, whether you want protection from sexually-transmitted infections, or you’re trying to prevent pregnancy. If that’s the case, you want a second method of birth control. Condoms do fail. They break! They can slip off inside of her after you’ve ejaculated inside of her and then you put her at risk of getting pregnant as well.

It grounds the orgasm. After you orgasm, there’s usually a period of time where it feels really good to stay connected, to have some stillness, and to keep that energy flowing. If you’re inside of her during this, it can feel AMAZING for her.

Coming inside of her might also be really hot for her. It might feel a little taboo, it might get her off, and she might have an orgasm just KNOWING that you’re orgasming! (Which is great! And also not possible if you have to pull out.)

Put a tiny bit of lube on the inside the condom.

Not a lot of people use this tip, which is a shame. Put a tiny bit of extra lube on the inside of the condom. Be sure to not put a lot – make sure you don’t put so much in there that the condom’s going to fall off – but just a little squirt inside the condom will allow you to feel WAY more sensations. This transfers that friction and movement a lot better, because you have wet on wet, instead of dry latex on dry skin.

Remember to never use oil-based lubricants (like massage oils or Vaseline) with latex condoms! The oil will break the condom! Trust me, a friend of mine learned this the hard way in high school and panic ensued.

Focus on your sensations from the very beginning.

Get out of your head and into your body and FEEL what’s happening. One of the ways you can do this is by focusing on your five senses. What does sex look like? Smell like? Sound like? Feel like? Taste like? If you focus on your five senses, you will remain in your body – in those vibes and sensations that are so incredible during sex.

You will be amazed. Once you take the pressure off yourself to orgasm, suddenly your body can relax, flood itself with sensations, and reach orgasm.

Not super intuitive… but what can I say? Sex doesn’t always make sense!

The Third and Best Way to Ensure You Orgasm Inside Your Partner (With A Condom On, Of Course!)

Hear me out: don’t ejaculate unless you’re having sex with your smokin’ hot lovah.

Why does this work?

Well, if you’re not ejaculating outside of when you’re actually having sex, your body, your horniness, and your desire to have sex will build and build and BUILD!

When you go to have sex with your partner, you’ll be more likely to reach orgasm because you haven’t ejaculated in a while. Easy peasy.

On the day you’re going to have sex, do a little something I call “revving your engine.”

Why does this work?

There’s a little bulb at the bottom of the urethra that fills with ejaculate: the fluid that gets shot out of your body. During sexual stimulation, fluid starts to pool in this bulb. After a while, it sends a message up to your brain that says “Hey! We’re full! Time to ejaculate!” Poof! Release!

Guns locked and loaded! Fire away!

What Makes This Tip Dangerous?

This is not a long-term solution, and I would not suggest doing this all the time. But until your body knows beyond the shadow of a doubt how to ejaculate with a condom, this is a great way to train yourself and get yourself into a rhythm where you can actually ejaculate every time with a condom.

If you struggle with premature ejaculation, be sure to check out my Masterclass, Come When You Want. Learn how to master control over when you ejaculate, so you can last as long as you want. That’s right — finally have sex all through the night in 90 days or less.

You can do it! Its just a matter of practicing and setting yourself up for success.

How to Make Sure She Comes Too During Sex

If you like this advice, be sure to check out my new course She Comes Too, which is all about how to become an AMAZING LOVER and will help you use your newfound skills to be incredible in the bedroom, to give her intense orgasms every single time, and to make her dream about you when you’re not around. ;)